Bengan tells: "In '79 me and Bernt travelled the U.S., digging the music scene. Visited Graceland and actually met Elvis' uncle.
I found a Gibson 355 quite cheap in a pawnshop. A bit trashy, garishly decorated - but a good guitar when I had worked it over. Later on I sold the guitar itself but kept the pickups. Today one of them is mounted in bridge position in my Fender Telecaster Thinline. That pickup is my most important piece of equipment!".

79: Click here for neat b/w photography of Nationalteatern sometime in 1979. Kurt Bünz in the lineup. 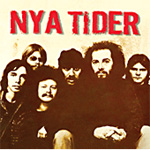 79: Tomas Forsell, vocalist/guitarist and founding member of Nynningen, records impressive album "Nya Tider" (i.e. "New Times") with the help of a.o. Totta Näslund, Bernt Andersson, Nikke Ström and Niels Nordin (drums). Bengt Blomgren involved as one of the two engineers only. However, Tomas Forsell is a fiery guitarist in his own right. Album is released in 1980. And is re-released in 2006 on CD. Well worth checking out.

80 July 1-17: Recording of "Globetrotter", an album by Björn Afzelius. Bernt Andersson is featured on keyboards, accordion, harp and vocals. Bengt Blomgren contributes in the role of recording engineer and part producer.

Back       Forward
Mail me at christer@fridhammar.com