And who am I? A Swedish blues enthusiast by the name of Christer, a moustached male (birth and persuasion), born 1948 and therefore by definition "middle aged" (or from the Middle Ages as some rap or techno fans might add), a white collar worker playing blue collar blues on a treasured Strat, a believer in Internet as a gateway to new friends and fresh  information - even as a tool for increasing democracy (all right, I'll get off the orange crate). Now, as they said in the U.S. TV series "Naked City" (the Middle Ages, remember): This is my story. 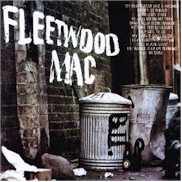 I fell in love Sunday, November 24 1968. With the blues, that is. The object of my affection was Fleetwood Mac.

The ambitious little cultural society "La Misette" of "Katedralskolan (The Cathedral School)", Växjö, Sweden had booked these Englishmen to play in the school's gathering hall.

I lived in the city of Växjö then. Not many foreign artists visited Växjö at that time so I just thought I'd take the opportunity. To be perfectly honest, I was more into the strange combination of jazz (my first record was a Charlie Parker EP) and vocal or instrumental surf music (still get a kick out of a good reverbdrenched "Pipeline" or vintage Jan and Dean/Beach Boys) but I subscribed to the New Musical Express and had read that the Mac was regarded a top quality band on the rise. This was the "Albatross" tour. I went there and had a major revelation.

The sound of Peter Green's and Danny Kirwan's twin Les Pauls through those mighty Orange amplifiers was unlike anything I'd ever heard. To me it was so loud that I felt I had to open my mouth or risk breaking my eardrums. But it left an indelible mark on my little mind. And I loved every second of it. So I started checking up on the blues.