One of my three heroes, along with Green and Clapton (how original!).
Guitarist for The Tridents. Met the spotlights with The Yardbirds as replacement for Eric Clapton who left Yardbirds hurriedly (recording single B-side "Got To Hurry"...) angered by the band's choice of  pop gem "For Your Love" as new single.

Beck took The Yardbirds - and the rock world in general - by storm, playing a ferocious psychedelic blues.
Need a sitar? Beck plays it on his Tele!
Need a guitar hero? Beck delivers - even when his guitar is unplugged...Fans don't notice. They scream anyway!
Need a truly personal guitar style? Steal it from Beck! I remember an ad for a Jeff Beck album (pictured barechested and sweaty) with the legend: "More People Finger Beck Than Anybody Else!". True. 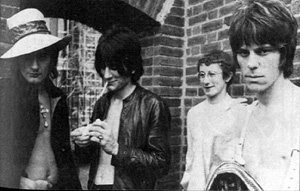 Beck has always loved being his own man. Having left the Yardbirds he made a couple of illjudged singles (with OK B-sides!) on the fervent advice of Mickie Most but then formed the Jeff Beck Group with Rod Stewart on vocals, Ron Wood on bass and (finally) Mickey Waller on drums (i.e. the lineup pictured to the right).
Nicky Hopkins on keyboards became group member later on.
Originally Ron Wood was to be second guitarist and Dave Ambrose (from Brian Auger's group) was meant to be the bassist, but Jeff asked Ron to switch to bass instead and Ambrose was out in the cold.
Viv Prince (of the Pretty Things), Aynsley Dunbar, Roger Cook and Rod Coons preceded Mickey Waller in the early stages. And Tony Newman replaced Waller on slightly inferior 2nd album. Six drummers!

Stormy relationship resulting in the first two albums below. Bluesy, brutal, great - and original. The first one, "Truth", is a monster with cuts like "Shapes Of Things" (a Yardbirds tune), "Rock My Plimsoul", "Blues De Luxe" and "I Ain't Superstitious".

Albums three and four are recorded with completely different outfit - despite group name.
Bob Tench on vocals. Heavy and professional - but didn't catch my imagination the same way.

Beck on Clapton, Guitar Player, Oct. '80:
"I've been seeing him recently, and I really take a whole different view on him now because I've managed to get myself into a position where I can enjoy his playing. He no longer has anything to do with my style - you know, at one time we were blues. And he was better. I think he can play blues better than I can because he studies and is loyal to it. I'm not loyal - I try to hotrod it up a bit and change it."

And then the rock/jazz fusion album "Blow By Blow" (1975) signalled the shape of things to come...
...and I enjoy these outings too - but this is not the time and place to rave about them (?)

Guitars and Amps Dept:
Check out our own Gear Page for info on Beck's guitars and amps.